Preparing for Death
by
Embracing Life

Prepared for Death? Not so much.

But Preparing for Death? Maybe, just a little.

I'm being honest. It's there, whether you verbalize it or not.

When you are faced with a terminal diagnosis, many things will race through your mind, not the least of which is Am I Going to Die?

And somewhere along the journey, usually after the first round of chemotherapy, the question transitions to Am I ready to Die? The side-effects may make you feel like you're just about there.

Even then, Mom's answer was No!

But am I thinking more about dying? Yes, that's truth. Impossible to deny.

And so begins the dance, the preparing for death, but still embracing life.

Along our journey, we've collected some beautiful anecdotes, stories, poems about this difficult transition from life into death. Some are humorous, some are contemplative, all spread a little light into an otherwise very dark subject.

Use the Good Stuff Before It’s Too Late

A friend opened his wife’s underwear drawer and picked up a silk paper wrapped package:

‘This, he said, isn’t any ordinary package.’

He unwrapped the box and stared at both the silk paper and the box.

‘She got this the first time we went to New York, 8 or 9 years ago. She has never put it on, was saving it for a special occasion. Well, I guess this is it.'

He got near the bed and placed the gift box next to the other clothing he was taking to the funeral home. His wife had just died. He turned to me and said:

I still think those words changed my life.

I sit on the porch without worrying about anything.

I spend more time with my family, and less at work.

I understood that life should be a source of experience to be lived up to, not survived through.

I no longer keep anything. I use crystal glasses every day. I’ll wear new clothes to go to the supermarket, if I feel like it.

I don’t save my special perfume for special occasions, I use it whenever I want to. The words Someday and One Day are fading away from my dictionary. If it’s worth seeing, listening or doing, I want to see, listen or do it now.

I don’t know what my friend’s wife would have done if she knew she wouldn’t be there the next morning, this nobody can tell. I think she might have called her relatives and closest friends. She might call old friends to make peace over past quarrels. I’d like to think she would go out for Chinese, her favorite food.

It’s these small things that I would regret not doing, if I knew my time had come.

Each day, each hour, each minute, is special. Live for today, for tomorrow is promised to no-one. 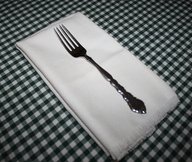 There is Something Better Coming

There was a woman who had been diagnosed with cancer and had been given three months to live. Her doctor told her to start making preparations to die (something we all should be doing all of the time). So she contacted her pastor and had him come to her house to discuss certain aspects of her final wishes. She told him which songs she wanted sung at the service, what scriptures she would like read, and what she wanted to be wearing. The woman also told her pastor that she wanted to be buried with her favorite Bible.

Everything was in order and the pastor was preparing to leave when the woman suddenly remembered something very important to her. "There's one more thing," she said excitedly.

"What's that?" came the pastor's reply.

"This is very important," the woman continued. "I want to be buried with a fork in my right hand."

The pastor stood looking at the woman not knowing quite what to say.

"That shocks you, doesn't it?," the woman asked.

"Well, to be honest, I'm puzzled by the request," said the pastor.

The woman explained. "In all my years of attending church socials and functions where food was involved (and let's be honest, food is an important part of any church event; spiritual or otherwise); my favorite part was when whoever was clearing away the dishes of the main course would lean over and say 'you can keep your fork.' It was my favorite part because I knew that something better was coming. When they told me to keep my fork, I knew that something great was about to be given to me. It wasn't Jell-O or pudding. It was cake or pie. Something with substance.

So I just want people to see me there in that casket with a fork in my hand and I want them to wonder ''What's with the fork? Then I want you to tell them: 'Something better is coming so keep your fork, too.'"

The pastor's eyes were welled up with tears of joy as he hugged the woman good-bye. He knew this would be one of the last times he would see her before her death. But he also knew that that woman had a better grasp of heaven than he did. She KNEW that something better was coming.

At the funeral people were walking by the woman's casket and they saw the pretty dress she was wearing and her favorite bible and the fork placed in her right hand. Over and over the pastor heard the question, "What's with the fork?" And over and over he smiled.

During his message, the pastor told the people of the conversation he had with the woman shortly before she died. He also told them about the fork and about what it symbolized to her. The pastor told the people how he could not stop thinking about the fork and told them that they probably would not be able to stop thinking about it either. He was right.

So the next time you reach down for your fork, let it remind you, oh so gently, that there is something better coming.

I don’t think so!

If you are thinking you might get bored or tired after being in heaven for a while...don't worry! Try to imagine something with me. Imagine you are a little bird who lives in a tiny cage made of rusty metal. And inside your cage you have a food dish, and a little mirror, and a tiny perch to swing on.

Then one day, some kind person takes your cage to a big, beautiful forest. The forest is splashed with sunlight. Proud, towering trees cover the hills and valleys as far as you can see. There are gushing waterfalls, and bushes drooping with purple berries, and fruit trees, and carpets of wild flowers, and a wide blue sky to fly in. And besides all these things, there are millions of other little birds, hopping from one green limb to another and eating their fill, and raising their little families, and singing their hearts out all through the day.

Harry Edsel Smith of Albany, New York:
Born 1903–Died 1942.
Looked up the elevator shaft to see if the car was on the way down.
It was.

In a Thurmont, Maryland cemetery:
Here lies an Atheist, all dressed up
and no place to go

In a London, England cemetery:
Here lies Ann Mann, Who lived an old maid
but died an old Mann.
Dec. 8, 1767

In a Ribbesford, England cemetery:
Anna Wallace
The children of Israel wanted bread,
And the Lord sent them manna.
Clark Wallacewanted a wife,
And the Devil sent him Anna.

In a Uniontown, Pennsylvania cemetery:
Here lies the body of Jonathan Blake.
Stepped on the gas instead of the brake.

In a Silver City, Nevada cemetery:
Here lays The Kid.
We planted him raw.
He was quick on the trigger
But slow on the draw.

A lawyer’s epitaph in England:
Sir John Strange.
Here lies an honest lawyer,
and that is Strange.

John Penny’s epitaph in the Wimborne, England, cemetery:
Reader, if cash thou art in want of any,
Dig 6 feet deep and thou wilt find a Penny.

In a cemetery in Hartscombe, England:
On the 22nd of June,
Jonathan Fiddle wentout of tune.

Anna Hopewell’s grave in Enosburg Falls Vermont:
Here lies the body of our Anna,
Done to death by a banana.
It wasn’t the fruit that laid her low,
But the skin of the thing that made her go.

On a grave from the 1880s in Nantucket, Massachusetts:
Under the sod and under the trees,
Lies the body of Jonathan Pease.
He is not here, there’s only the pod..
Pease shelled out and went to God..

In a cemetery in England:
Remember man, as you walk by,
As you are now, so once was I
As I am now, so shall you be.