Pancreatic cancer treatment options have become the newest puzzle to figure out in our family. We began wrestling with decisions on mom's care even before we had really come to terms with her cancer diagnosis.Within days of her biopsy, we were on the phone making an appointment with an oncologist.

Now, finding an oncologist in itself is really a whole other can of worms. Let's face it, we don't have too many oncologists on speed dial around here. Nor do our neighbors. So finding one and hoping he was good were matters of monstrous proportions.

But find one we did. And we were able to arrange a consultation within a week. That's when the education lesson began.

TIP: If possible always bring a family member or friend with you to doctor appointments, especially to these first consults.

No matter how knowledgable and level-headed you are, when the cancer diagnosis is yours, it rattles even the best of us. You won't remember half of what the oncologist tells you.

I began taking a notebook with us to all the appointments and I wrote instructions, directions, warnings, emergency phone #s and all manner of information in that little notebook. It was invaluable when it came to checking ourselves. Invariably, the question would be: "now, what did the doctor say about a fever?" or "how often was I supposed to take this?" The notebook is well worn and just about ready to be retired. 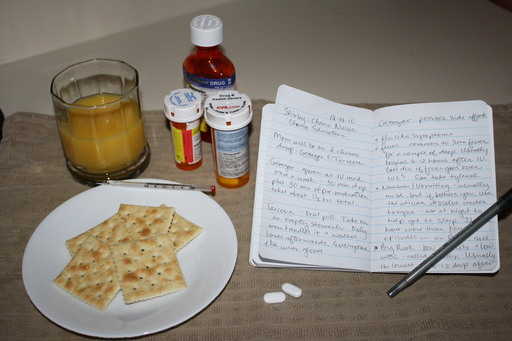 Notebook #2 is waiting in the wings like a promise. Mom never thought she'd live long enough to fill even one notebook.

But, I digress, back to the pancreatic cancer treatment options.

We have learned that treatment for pancreatic cancer really hasn't changed much in the last few decades.

I think Lisa Niemi, Patrick Swayze's widow, said it best, when she told Good Morning America's Robin Roberts that pancreatic cancer today is where breast cancer was 20 years ago.

Back then, breast cancer was a death sentence. But due to diligent, focused, committed advocates, and amazing medical break-throughs, breast cancer survival rates have sky-rocketed.

Pancreatic Cancer is not there yet. For too many it is still a death sentence.BUT that is changing. With each new clinical trial, we are getting closer to that elusive "cure."

Now, to be clear, our oncologist was quick to point out at that first consult, that we really can never say "cure" when it comes to treating pancreatic cancer. (Not very positive.)

He also said that the current therapies for pancreatic cancer are marginally effective. (Like, they don't work too well? Again, not very positive.)

He concluded by saying that his main goal in treating the pancreatic cancer patient was to help them live as long as they could, as well as they could. (Sounds kinda positive, but in a hospice kinda way, so nope, definitely not positive.)

No wonder pancreatic cancer is considered a death sentence.

Since this was the same doctor who told us that most pancreatic cancer patients only lived 3 to 6 months after diagnosis, you're probably not going to be surprised that we got a second opinion. And switched doctors.

And it was so much the right thing to do. Our new oncologist is positive and focused on mom's recovery. He said that there are basically 3 pancreatic cancer treatment options:

1. Surgery - Surgery to remove the tumor offers the best chance for long term control of all types of advanced pancreatic cancer. This surgery is nicknamed the Whipple Procedure, after the doctor who perfected it. In general, a tumor can be removed with surgery if it has not spread (metastasized) beyond the pancreas and does not involve major blood vessels. Mom's tumor wraps around the portal vein and that makes surgery impossible at this time. If you or a loved one has personally experienced this surgery, we would love to hear about it! Click here to share your Whipple Surgery story.

2. Chemotherapy - Chemo is the use of anticancer drugs to destroy or slow the growth of cancer cells. Chemotherapy may be used with radiation to help shrink the tumor before surgery. It may be used after surgery or radiation to destroy any cancer cells that may have been left behind. Or it is used as the first line of treatment if the cancer cannot be removed surgically. The 3 most common chemo drugs for pancreatic cancer areGemzar, Tarceva, and 5-fu. There is also a "new" drug entering the field. It is called Folfirinox and has shown promise in several studies.

3. Radiation Therapy - Radiation uses x-ray beams to shrink the tumor. Radiation can be used on locally advanced pancreatic cancers when surgery is not an option. And it can also be used if surgery was performed to help destroy any cancer cells remaining. Radiation may be given alone or with chemotherapy or other treatments. The chemotherapy drugs most commonly used with radiation therapy are fluorouracil (5-FU) and gemcitabine (gemzar).This may be done before surgery to make it easier to remove the tumor. Radiation can also be done after surgery. This pancreatic cancer treatment can also be used to shrink tumors in the advanced stage of the disease to ease pain.

Since mom's cancer was inoperable, we began her pancreatic cancer treatment with chemotherapy.

After the first cycle of chemo, we moved onto radiation. And then back to chemo. Our doctors are monitoring her progress with periodic CT scans, scopes and tests called tumor markers.

The war on this cancer is composed of many small skirmishes and battles. Some we win, some the cancer scores on, but we're moving forward.

We are journaling each treatment here, so keep checking back on the progress.

We're not afraid to reach for that cure. And I hope you'll join us.